Running 5k- How Hard Could It Be?

Cue the start of 2019, it’s very cold, I’m feeling lethargic after all of the excess of Christmas and admittedly I am really struggling to keep positive. I am definitely a Summer person, rather than a Winter person and really struggle at this time of year! I saw one evening that a friend had shared a post about a ‘learn to run 5k’ club on Facebook and in need of a challenge to set me up for a good year I thought ‘OK, let’s do this- I’m going to run 5K!’ I’m not a spontaneous person, but I made this decision to run 5k there and then.

It’s been a bit of a long-standing joke, that every year I write a ’100 things to do’ list for the year ahead, and for the last few years, ‘run 5k’ has been on the list, but I have never actually got around to doing it. My memories of running as a child were not positive. The bleep test I found to be absolute torture and cross country in gale force winds was something I tried very hard to forget about. As I result of these negative experiences, I have kept the idea of running very much as a source of punishment and so I never even contemplated running as an adult.

Believe it or not I was reasonably fit to begin with, not athletically so obviously, but I do regular body combat and body pump classes and I walk over 100K steps every week, so I honestly thought that running 5k wouldn’t be a big massive challenge. I was wrong.

The biggest issue for me was that running club was at 8pm on a Monday night, in the middle of winter and in the dark. As 9.30pm is usually my bedtime, I knew this was going to be a potential issue as well (I’m not even joking about the 9.30pm bedtime, I love my sleep and get up very early every day!)

So, I had signed up to a running course, led by a brilliant coach called Kath who I knew was going to get us all through it! The course was 9 weeks long, we would run once a week with the group, then twice a week either individually or with the group and by the end of the 9 weeks I would be able to run a 5k non-stop! Easy right? Nope! Little did I realise how tough I was going to find it!

Week 1 arrived way too quickly, it was time to begin! On Monday 7thJanuary, all we had to do was run for 1 minute….. then walk for 3 minutes…. 7 times. I did it much to my relief and so did everyone in our group. It was a great feeling to run with other people and to achieve our targets as a group and would definitely recommend group running to anyone. Honestly though, I was amazed at how tough it was- I found it to be really hard on the lungs and on the legs. I was exhausted afterwards. But I did another two runs that week and week 1 was complete, hurrah!

One thing I didn’t have was proper running shoes and I made the decision to invest in some. This was an interesting experience, involving a treadmill, having to run on said treadmill in a shop window and lots of talk about pronation and gait and running jargon. I really was entering a new world full of running jargon, but the guy in the running shop was really helpful and I left the shop confident that I had a good pair of running shoes, thus minimising my risk of injury whilst running.

As the weeks went on, the running distances gradually increased in duration and the walking distances decreased. Some weeks were so hard, especially when it snowed, when it was -3 outside, when it hailed massive hailstones and also when I was poorly. My mind was telling me that I couldn’t do it several times during every single session, which is apparently normal.  Also, for the first 10 minutes at least my legs hurt and felt like lead, before somewhat loosening up and becoming easier, it was a case more often or not of just pushing through the pain and not giving up. Some sessions were easier than others and others I just wanted to give up but didn’t.

Most weeks I would get home, cold to the bone and shivering. Two or three occasions I found myself up most of the night shivering after running and this was completely unexpected. A few others said they also felt like this and I do not consider myself to be a ‘cold’ person, but I was shocked at this negative side effect. I never had this whilst walking so it was a completely new experience for me.

Saying that, It amazed me how much we all progressed as a group as the weeks went on, how much our lung capacity had increased so much so we wouldn’t feel out of breath when running, and how each week we could go that little bit further.

The funny thing was that I didn’t realise we were running 5k the night of the 5k, I thought there were 9 weeks of training then the run, so I was shocked when I realised it was in the 9th week we were going to do it. In a way it was good as it didn’t give me time to worry about it, as in week 8, whilst we ran for 38 minutes, it was only 9 minutes we had run consecutively for as we had short bursts of walking in between the running.

But we did it, we were slow, but we didn’t stop. The first 10 minutes were painful on the legs and I kept having to tell myself to keep going. It was really all about the mental game. I even got emotional halfway, because I didn’t think I could do it, but with the encouragement and support of my fellow runners I completed it and I got a medal as well- as my running coach Kath would say whoop whoop 🙂 I was a sweaty, red mess at the end, but a happy mess and proud of what our running group had achieved.

OK so I will not be running a 10k, let alone a marathon. I want to do a park run and maybe a charity 5k but that is it. I have maximum respect for those who do longer distances but in all honesty, I find running so utterly boring. So stupendously tedious! But this that is my own opinion and I know many others disagree 🙂 I believe life is too short to do something you don’t really enjoy, so I’m going to mainly stick with my gym classes and walking from now on.

For me, running a 5k, was just to prove to myself I could do it, which I did and yes, I felt very proud of myself for achieving this. It just goes to show you can do anything if you put your mind to it!

Conclusion- Can anyone run a 5k?

I believe that most people should be able to run a 5k if they are injury free and reasonably fit overall. It is harder than I ever thought it would be so I would definitely recommend doing a 9 week programme to build up very slowly and as part of a group, so that you can all support each other and also get guidance on technique etc. to avoid injury.

If you want to do it, you will do it. The human body is incredible! You will be amazed at what you can achieve and how much you will progress over 9 weeks. It’s not easy but the satisfaction and sense of achievement you get from reaching your goals is indescribable.

This blog was a little different this month! I hope you enjoyed it and if you have any tips on running or how to get started, I would love to hear. I’m very much sharing my learning to run experience from an absolute beginners point of view. 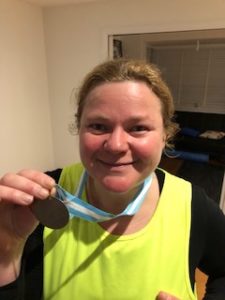 Next month we will be talking about the importance of self-care.

One thought on “Running 5k”